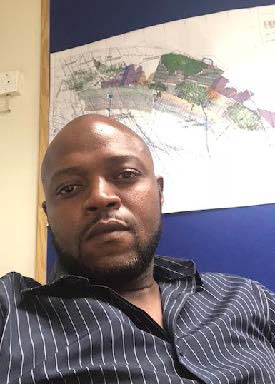 Personal Best Achievement/s: My best achievement is yet to come. I am always looking to achieve more tomorrow than I did today and strive to improve myself all the time. However, I am most proud of the work I have done in developing young graduates and seeing them becoming competent Rock Engi-neers who have made great contributions to our profession.

Philosophy of Life: Always look on the bright side of life. Adopted this ethos after I watched Monty Pythons’ Life of Brian countless times.

Favourite Food/Drink: I am very partial to a glass of good cognac. I enjoy traditional African food such as intloko, ulusu, umngqusho.

Favourite Sport: Generally, I’m a petrol head, so Formula 1 racing and any other motorsport is a fa-vourite. Although I was terrible at athletics, I enjoy watching athletic events such as the IAAF diamond league.

How did your career in the mining industry begin and where are you now?

I became a Mining Engineer by accident really. At high school, I was good in STEM subjects and I knew I wanted to do something in the engineering field. Mining Engineering sounded more exotic than civil or mechanical so I chose that. I never had any career guidance whatsoever growing up but I’m glad I ended up in something I enjoy. I am currently in charge of the Rock Engineering function for the Sibanye Stillwa-ter Platinum mechanised operations.

Why did you choose Rock Engineering?

Like every Mining Engineer, I had the opportunity of experiencing the different disciplines within Mining Engineering. I discovered I did not have the temperament suitable for an operations Mining Engineer. My academic tastes have always been eclectic and Rock Engineering taps into so many skillsets such as geolo-gy, mining, mathematics, physics, materials science and so on. It’s a perfect fit for me.

Please tell us a bit more about your career journey?

After completing my BSc., I worked as a graduate trainee at a couple of Anglo American mines in Zimba-bwe. In 2004, I was fortunate to be awarded a Chevening Scholarship by the British Council to pursue MSc. studies at the Camborne School of Mines in Cornwall, UK.

While doing my MSc., I was invited for interviews with Anglo American in the UK. I was successful and was given a choice of where I wanted to be deployed within the Anglo global operations. I chose SA as this was closer to home. I came to SA in 2006 and while doing experiential rounds in the different de-partments, I spent some time with Graham Priest who was then the Chief Rock Engineer.

I had a great relationship with Graham and he encouraged me to join his department as a trainee SCO. I got my SCO certificate a few months later and within a year of that, I had passed my COMRECC. I will be the first to admit that at that time I was not ready to be appointed on a shaft and had a steep learning curve to negotiate, but I am grateful to people like JC van Zyl who gave me a good grounding on practical strata control, Alan Olivier who took me under his wing for a few months to show me the ropes after I had passed my ticket, Graham Priest who believed in me and gave me a chance, Lucky Mnisi who helped me understand mining and how to handle relations with stakeholders such as the DMR. Subsequently, over the years, I got appointments at Anglos’ Boschfontein Shaft, Townlands (now Khuseleka) and Waterval (now Bathopele) before my current role.

What are some areas that you believe will become of increasing importance in the near future of the rock engineering discipline?

Our mines are currently operating under unfavourable macroeconomic conditions. A lot of our opera-tions are marginal if not loss making and it is becoming increasingly necessary for Rock Engineers to look beyond their narrow specialities and learn to take a holistic view when assessing problems and developing solutions. Tomorrow’s Rock Engineer must understand mining and the impact of his/her decisions on the operation. SANIRE is doing good work towards this by having a blasting ticket as a pre-requisite for doing an SCO practical.

Although still a relatively new discipline, the current state-of-the-art of Rock Engineering is not too different from 20 years ago. Very little research and scholarship is being undertaken in our organisa-tions. Added to this, very good research done by research institutes in the past has not seen the light of day in the mines. The increasing challenges we face (seismicity, FOG’s, rockbursts) make it impera-tive that we undertake applied research in our operations and to ensure our organisations are attuned to adoption of research findings.

What advice would you offer people aspiring to be in your position?

Who is your role model/mentor?

I have never really subscribed to the concept of a role model. I consider myself my own role model and I strive to be the best I can be. People from all walks of life inspire me with their different opin-ions, ideas and perspectives. I learn and acquire good things from the people I come across regardless of who they are; from a lowly RDO to a CEO.

What is the best advice you have ever been given?

You can never please everyone, so don’t try to.