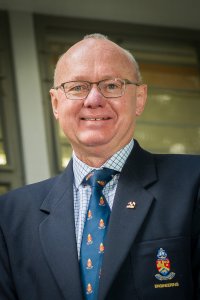 For the 29th ISRM Online Lecture the ISRM invited Professor Francois Malan, from University of Pretoria, South Africa. The title of the lecture is “Rockburst support in shallow-dipping tabular stopes at great depth ”.

The lecture will be broadcast on monday 30th March, at 10 AM GMT and will remain available in the online lectures dedicated webpage .

Prof Malan started his geotechnical career in 1993 and spent the next 11 years at the Chamber of Mines Research Organisation (later CSIR Miningtek). There he conducted research on the rock mass behaviour in deep tabular mines. His particular interest during this period was the time-dependent behaviour of hard rock and he used this as topic for his PhD thesis. In 2011 he joined Groundwork Consulting and worked on pillar designs and layout problems in the South African platinum industry, geotechnical problems in the deep gold mines and instrumentation development for geotechnical applications. In 2011, he joined the gold mining industry and was appointed as Senior Consultant Rock Engineering of Gold Fields South Africa. These mines were taken over by Sibanye Stillwater in 2013 and he remained with Sibanye Stillwater. In 2018, he joined the University of Pretoria as Associate Professor .

Over the years, he has received various awards for his contributions to rock engineering. These include five gold and silver medals from the South African Institute of Mining and Metallurgy and three Salamon awards from the South African National Institute of Rock Engineering for best publications. The ISRM awarded him the Rocha medal in 2011 and in 2017 he presented the Franklin Lecture at the AfriRock Symposium in Cape Town. One of his PhD students, Dr Michael du Plessis, was also awarded the Rocha medal in 2018. Prof Malan has authored or co-authored over 81 technical papers on rock engineering and he delivered 7 invited keynote addresses at national and international conferences .

The lecture will remain online so that those unable to attend at this time will be able to do it later. As usual, the attendees will be able to ask questions to the lecturer by e-mail during the subsequent five days. All online lectures are available from this page .