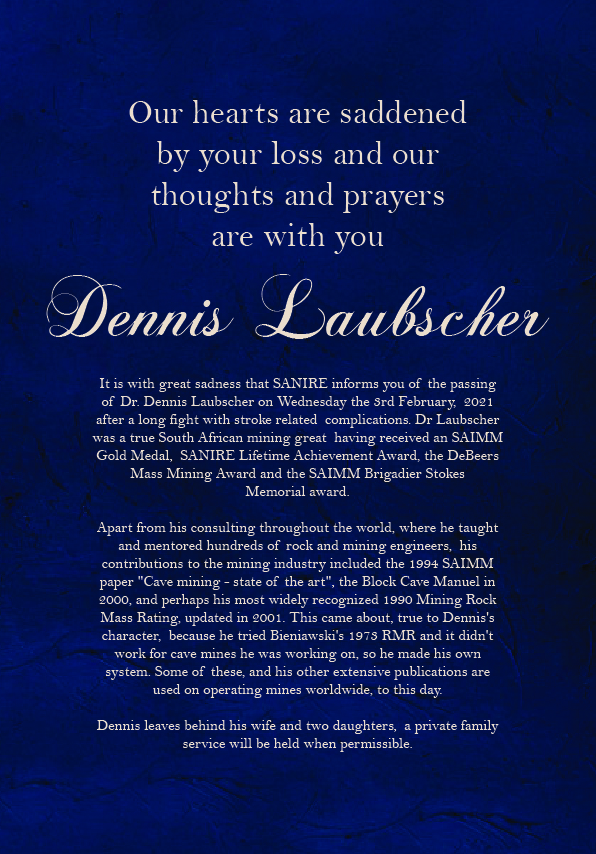 It is with great sadness that SANIRE informs you of the passing of Dr. Dennis Laubscher on Wednesday the 3rd February,  2021 after a long fight with stroke related  complications. Dr Laubscher was a true South African mining great  having received an SAIMM Gold Medal,  SANIRE Lifetime Achievement Award, the DeBeers Mass Mining Award and the SAIMM Brigadier Stokes Memorial award.

Apart from his consulting throughout the world, where he taught and mentored hundreds of rock and mining engineers,  his contributions to the mining industry included the 1994 SAIMM paper "Cave mining - state of the art", the Block Cave Manuel in 2000, and perhaps his most widely recognized 1990 Mining Rock Mass Rating, updated in 2001. This came about, true to Dennis's character,  because he tried Bieniawski's 1973 RMR and it didn't work for cave mines he was working on, so he made his own system. Some of these, and his other extensive publications are used on operating mines worldwide, to this day.

Dennis leaves behind his wife and two daughters,  a private family service will be held when permissible.